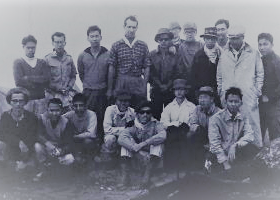 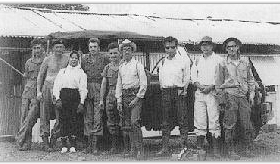 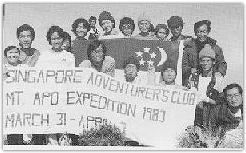 In 1962, four enterprising young people with a common interest in outdoor activities decided to form a club for young adults with a quest for adventure. The four were Messrs, Peter Teo, William Chin, Paul Fong and Eddy Toh. Together they formed the Young Adventurers’ Club.

It was later decided that the Club should be renamed, The Singapore Adventurers’ Club. And on 17 August 1963, it became the first all-volunteer adventure club in Singapore. With the change in name and growth in popularity, membership saw an increase in number.

In the 60s, activities such as hiking through Bukit Timah Nature Reserve, picnicking at Tanjong Tajan (Pulau Ubin) and barbecues at Mata Ikan were organised. Venues for real adventure in Singapore were limited. Therefore, the Club had to venture out and in August 1963, the first mountain climbing expedition was organised to Mount Ophir in West Malaysia. This marked the inauguration of many more climbs of Malaysian mountains.

The 70s saw the growth and expansion of the Club’s activities and membership. The most significant achievement in the 70s was the first successful climb of Mount Kinabalu, the highest peak in South East Asia. At that time, it was considered a major feat for adventurers. Following the successful climb, the Club organised another expedition to West Malaysia’s highest peak, Gunung Tahan.

Besides the rough and tough outings, soft option tours and social events were organised in line with SAC’s objective to increase its scope of activities.

The 80s saw the Club venturing into new territories after having conquered the Malaysian mountains many times. With the coming of age, the Club chalked up another first with the successful attempts on Mount Sinabung in Sumatra Indonesia and Mount Apo in the Philippines. Several groups of members also set the pace by trekking in the Himalayas, climbing the Jade Mountain in Taiwan, snow trekking in Nepal and hiking through India and Pakistan. A few members even tried river rafting in Taiwan and New Zealand to the amusement of the locals there.

The 80s also saw the shift of Club activities from the land to the sea. More sea sports encompassing scuba-diving, fishing, canoeing and island trips were organised.

In looking back, the Club has come a long way. From a relatively unknown club, it is now a Club with an impressive history and a long list of outstanding achievements.